Posted by Shahrill Ramli on October 19, 2012
Posted in: Professional Life, Travelling - Out From Chrysalis. 3 Comments

Being busy is cool although at times, your mind is quite saturated with the workload and emotion fluctuates now and then. Still, it’s just the phase you have to savour and devour as a working person. 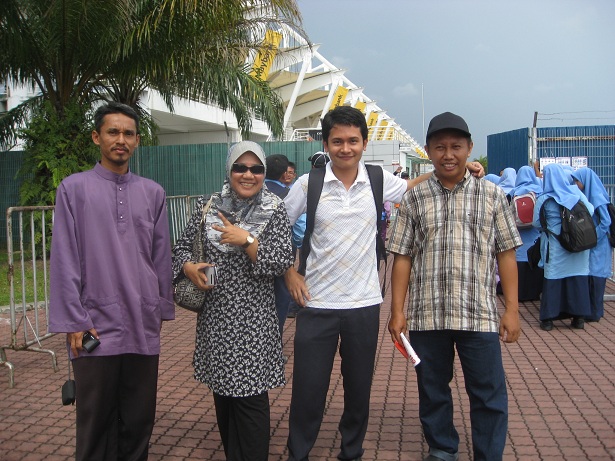 Ustaz Shuib, Kak Adda, Me & Cikgu Rosmainy posing while waiting for the workers to let us in!

After the annual camping session commenced last week, this week is slated for Final Year Examination spanning from 15th October 2012 until 19th October 2012. As usual, my subjects – Science and English were accumulated on Thursday, 18th October; both on the same day! So I just received piles of answer sheets of Science and English from 4 Dynamic, 4 Flexible & 5 Brilliant (no more 6 Gallant as they already sat for UPSR!). Still finding tune to gear up myself to mark the answer sheets! Usually, Science is tolerable – on the other, English is VERY TIRING especially when you read the Guided Writing Section (Section C) a.k.a. Short Essay! You need to relax your mind and check 5-6 papers at once and then stop for a while; just to rejuvenate your mind and mood perusing the topsy-turvy sentences!

Apart from that, I’ve also finished doing some professional write-ups, translation and perusing-and-skimming/scanning-for-grammatical errata for the school community as well as outside of school community. I can’t delve much on that; but what I want to share is that it is actually good when you do that. I guess from the initiation and confidence triggered when I first helped my Deputy CEO back in Affin Islamic Bank to do some write-up and co-assisted in Islamic Banking paperwork, it sort of instilling confidence for me to do paperwork/translation for others. Furthermore, you can actually gain new knowledge when you were skimming on those paperwork as usually, the topics are quite exotic and mind-exciting. I like the idea of gaining new knowledge on new perspectives and those paperwork really help me to explore new realm of knowledge such as :-

I am definitely looking forward for more of these!

Ducati? I am not good with motorcycles but apparently that was what one of my pupils told me. Correct me if I am wrong!

Anyway, today I had to accompany few fellow Year 6 teachers (since I am teaching Science for Year 6 this year) and prefects to Sepang International Circuit to witness the practice routine a.k.a. “warming-up” sessions of Malaysian Motorcycle Grand Prix which is scheduled for 3 days commencing today 19th October 2012 until 21st October 2012. It was due to invitation by the organizer to schools circa Klang Valley (Kuala Lumpur & Selangor) and near Sepang. Although I am not a motorcycle aficionado, but this is a great opportunity for me to visit the Sepang International Circuit which I’ve always see from afar because I always frequent Bagan Lalang for Seafood and the circuit situated on the way there; but never bother to visit the circuit. 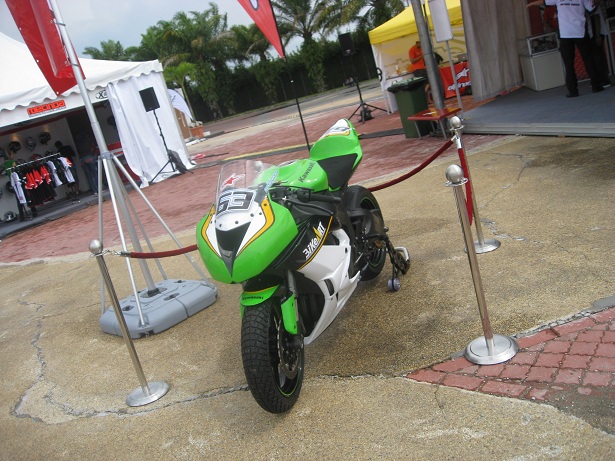 Morning at school and executed the tasks as usual; and then pushed off from school circa 11.00 a.m. We arrived at the beautiful KLIA Mosque (I love the mosque! The architecture is so beautiful and classical Islamic) around 12.00 p.m. but we went to have delicious lunch first at stalls nearby and then went back to the mosque around 1.10 p.m. By the time the Jumaat Prayer finished, rain started to pour down heavily BUT weather has become so unpredictable these days; just as we reached the Sepang International Circuit which is like merely 20 minutes distance, the rain stopped and sun shone brightly! Intriguingly amazing, Subhanallah! 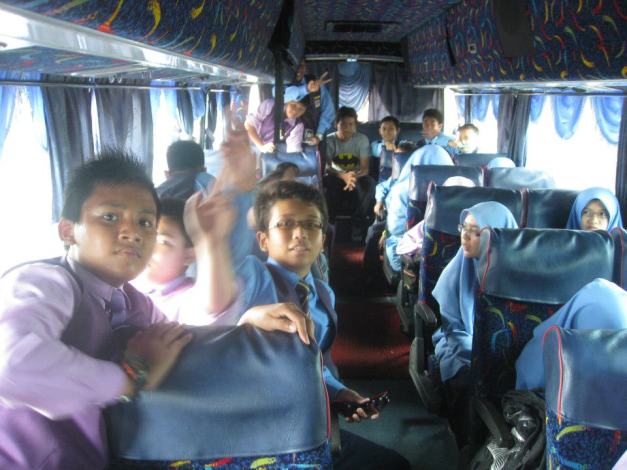 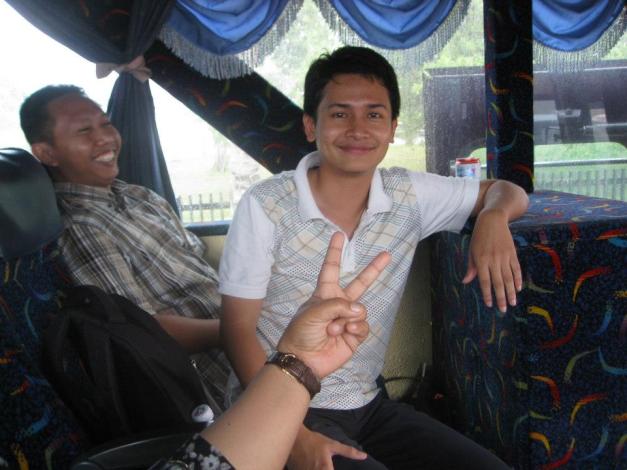 The atmosphere was quite OK as you can see several tents were already erected and getting ready for the weekends blast-out. We had to line up at the entrance for more than half an hour before let in – thank God for the rain; if not, possibly we would have to wait longer!! We were given seats that were literally in front of the circuit.  According to Kak Yati’s son, Aiman (was it? I am not sure but I called Man), the seats were very pricey and expensive and we were sort of lucky to be able to have that seat. Well, we savoured the moment; and the crowd cheered at the racers who were enjoying the attentions and made some friendly gestures when they passed in front of us. 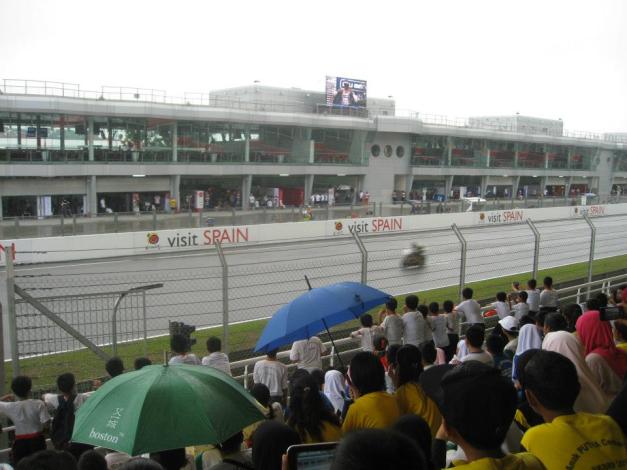 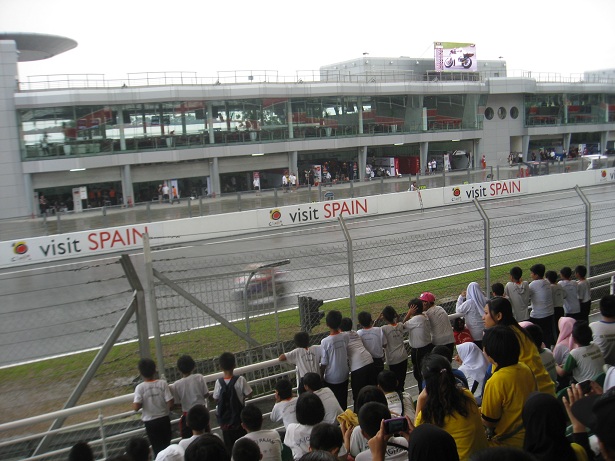 We were then whisked into underground tunnel to the other side of the circuit across the racing track. All of the racers’ teams from established names were assembled along the alley at the side of racing track and we were told to use the School Pitlane Walk to witness the team doing their “thangs” and all.  We even saw the celebrated junior motorcyclist, Hafizh Syahrin Abdullah giving signatures.I managed to capture his picture but by using Kak Lin’s camera as mine (Kakak’s) went kaput due to batteries fiasco.

Hafizh Syahrin. I managed to capture his picture LIVE but then the pictures were not in my camera; at Kak Yati’s son’s & Kak Lin’s. But I’ll publish it once I got them. This is courtesy of Google Image, however.

We called it off around 5.30 p.m. and the bus was waiting for us. It was so congested and rainy when we pushed off back to Serendah. Around 6.30 p.m., we were still in NKVE Highway and yet to perform Asar prayer. Initially, the bus driver was not keen and refuse to stop for us to perform our prayer because he had another engagement to attend around 8 p.m. and there were still a lot of vehicles thronging the highway as people were coming back from offices and additionally, it was raining! BUT, Ustaz Shuib was adamant for the bus driver to stop; so he gave in and provided us merely 10 minutes at PETRONAS station in NKVE Highway circa Damansara to perform our Asar prayer. It was really a dash-and-express movement for all of us!

The circuit girls – obviously they were the eye-candies for red-blooded males especially for school kids/teenagers who had just reached puberty or the testerones are kicking hard. Sex sells.

It was exactly around 8 p.m that we finally reached the school compound. Luckily, we took the Bukit Beruntung entrance from PLUS Highway instead of using Rawang’s as surely the latter is congested with vehicles! 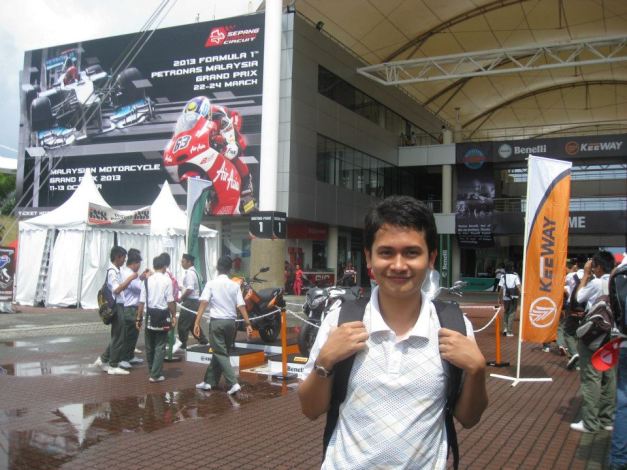 One for the nostalgia.

On whole, it’s a great new experience for me. Tiring but relieved that another programme in professional calendar has successfully executed! Alhamdulillah!