Posted by Shahrill Ramli on May 24, 2014
Posted in: Professional Life. 2 Comments

Stress is the new ideology for me, at least for this recent fortnight! Apart from the overloaded assignments, school workload showed no mercy as well; with the persistent order by Authority to conduct Report Cards Day before the school holidays (without knowing the actual format on how to explain to our clientele about the KSSR tables; but solely relying on the teachers ourselves!) as well as to attend the course for KSSR Sains Tahun 5 for 2015 on the capacity as the Head of Science Panel, were really taking toll on me. Once a while, my mind flickers with the idea of just quitting the job and concentrate on Master’s Degree (of which I really enjoy!). But this is no game. I have to REALLY PLAN about the money flows, the changes of my grade scheme, the continuity of my services in government, etc. 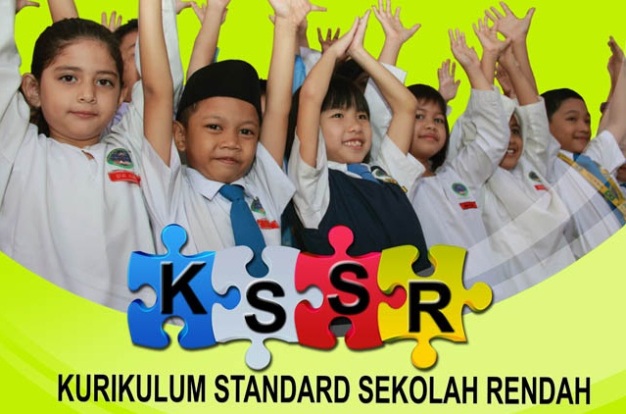 Boon or bane? Time will tell. As a government (still) civilian, condemning will result us being penalized. Our lips are expected to be sealed.

Anyway, I just wanted to re-cap about the gist I have learned from the “Kursus/Taklimat Orientasi KSSR Sains Tahun 5” which was conducted by PPD Hulu Selangor for all the Heads of Science Panel of primary schools, for the lessons to be conducted next year, since the batch is the first cohort of KSSR which was first implemented in 2011.

The controversial evaluation scheme. What about us who are involved directly to execute this? “Saya Menurut Perintah”. Enough said.

Well, for those who do not know; KSSR is actually “Kurikulum Standard Sekolah Rendah”, which is a new policy to replace KBSR or “Kurikulum Bersepadu Sekolah Rendah”. With KSSR, evaluation on pupils’ achievements are solely based on the schools and teachers whereas KBSR are exam-oriented with UPSR as the final benchmark of the pupils’ achievement. With the vehement demands of Malaysians calling the ministry to reduce the “exam-oriented” scheme, KSSR was hatched BUT with quite a number of controversies. Parents are not satisfied with the evaluation schemes; and teachers are confused with multiple orders from Authority on how to execute the evaluations! Filings and documentations are expected to be executed by teachers who are forced to spend the focus more on these shenanigans rather than cracking skulls to find creative ways in conducting lessons! But of course, teachers are just the “executioner of policies” via “Saya Menurut Perintah” (if not, we will be PENALIZED!!! Eeeek!!). So, we do what we are told to do. 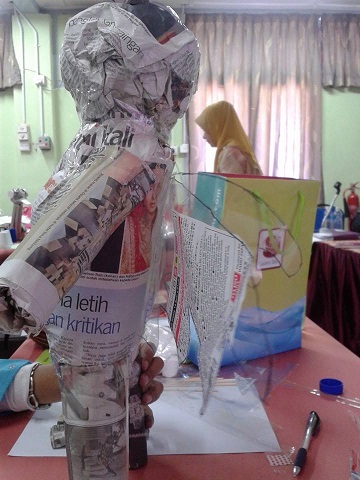 Roll the old newspapers! Our “Bearverine” even got transparent wings! Awww…Hahaha! 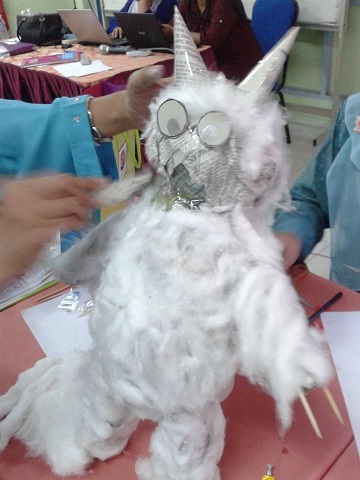 Anyway, the two days courses which was held on 20th and 21st May 2014 at SK Kuala Kubu Bharu was an OK session although I was in the midst of chaotic atmosphere in school (after-exam) and tonnes of Master’s Degree assignment season. Basically, it was more or less something that we knew from last year’s KSSR course but with new knowledge and explanation given by the national main coaches (“Jurulatih Utama Kebangsaan”/JUK), we had clearer visions on how to conduct the lessons. 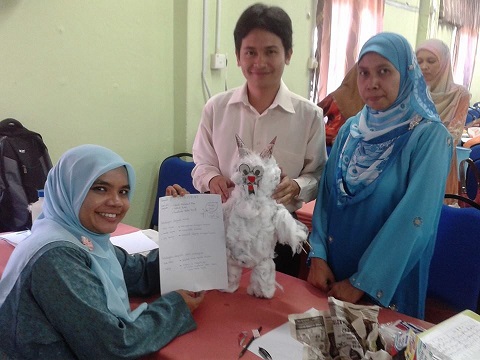 My group with “Bearverine”! Hahahah!

The sessions mainly were dry topics but all of us really enjoyed the simulation of the topic “Animals Protection Against Enemies & Extreme Weathers” of which to be included in the Year 5 Science syllabus next year (for KBSR, it is taught in Year 4). We were segregated into 12 groups and were asked to create an imaginary animals equipped with body parts to protect themselves from enemies and extreme weathers; from waste products! 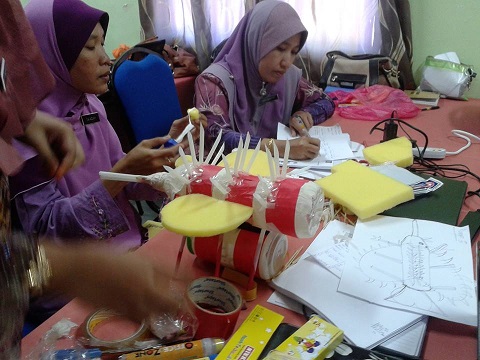 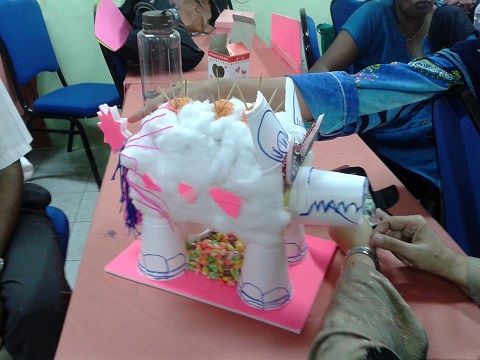 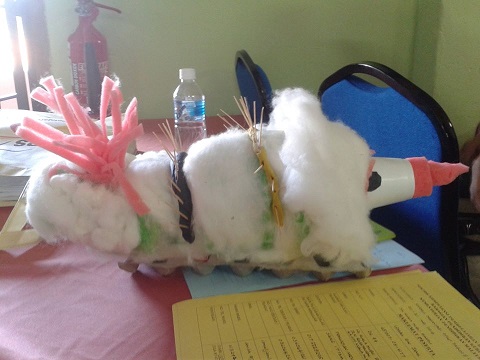 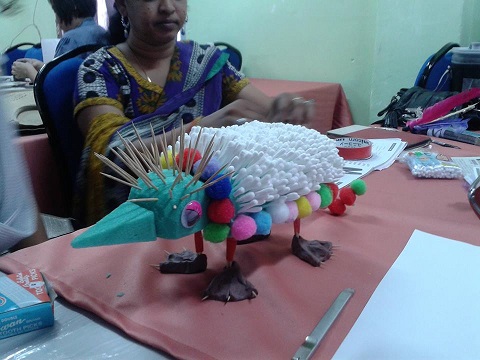 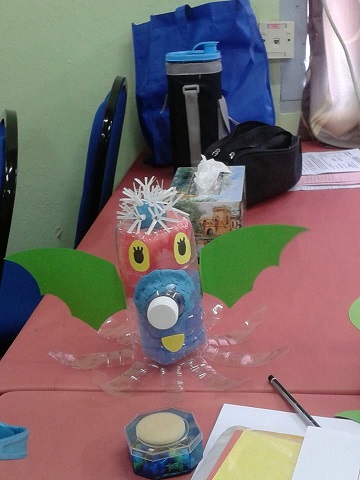 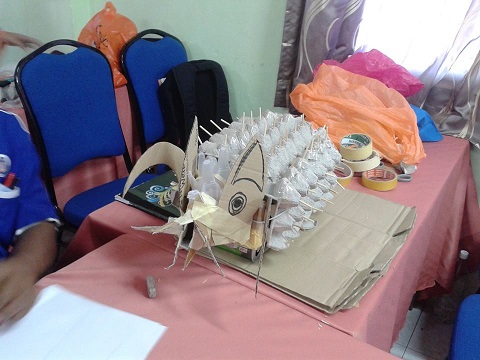 My group decided to do a mannequin-like or Eewoks (do you guys remember the cartoon, a spin-off from Star Wars??) creature which was so-called a hybrid of bear, experiencing an evolution into an X-Men’s “Wolverine” with steel claws and all; to be named as “Bearverine”!!! Hahhaha! An idea concocted less than 15 minutes and we were among the simplest ones – from old newspapers, glue, cotton, several toothpaste boxes, stationery and etc. But seeing other groups – whoa! Amazing! 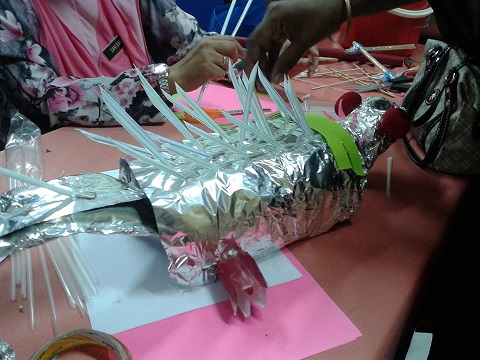 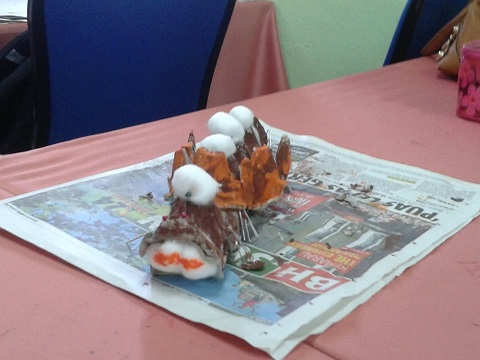 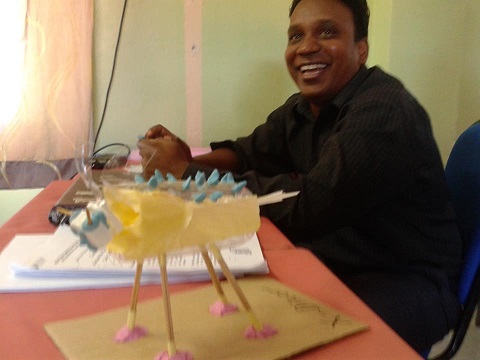 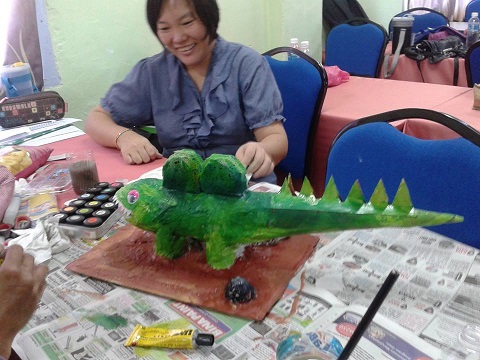 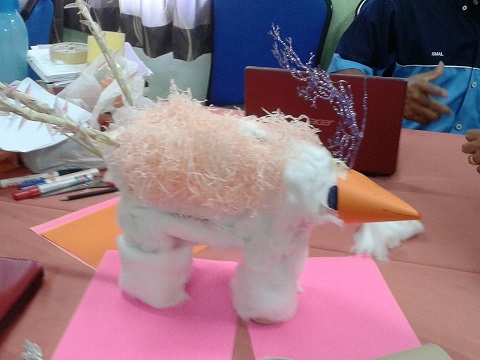 Seeing other groups, I was so amazed with their creative minds! You know, Malaysian teachers are creative. We need more recognition rather than being tormented and besmirched with tonnes of unnecessary workload and documentation tasks of which are of no usage, at all! Given ample time, we can actually produce creative lessons for pupils. BUT, no…! Authority wants us to DOCUMENT all the works…..So, we oblige (and I can’t wait to get out from the system. Sad to say as I love teaching BUT I can’t).

On whole, it was great idea to be applied next year. I wonder would next year be the least year for me in the primary school education line? Will it be an additional to  “creative drainage” to the education world? Time will tell, Insya ALLAH. 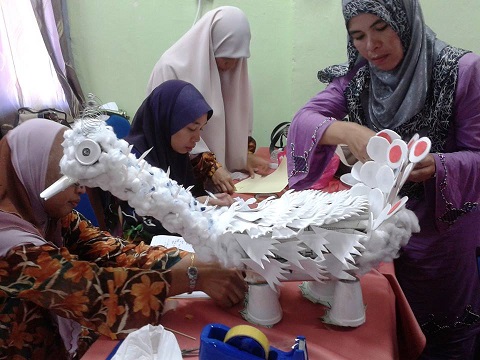 The clear winner. Amazing and creative mind! Imagine within less than 2 hours, they could produce this elegant creature? Salute Science teachers of Hulu Selangor!