The Bride Of The Red Sea (Episode XVI) : The 2014 Umrah (Part 1) – 1st Pilgrimage With Qarnul Manazil As Miqat @ Makkah al-Mukarramah.

Posted by Shahrill Ramli on June 23, 2014
Posted in: Searching My Soul- Back To Basic, Travelling - Out From Chrysalis. 5 Comments

8th August 2012; the first entry I wrote in my blog on my plan to perform Umrah under the category “Searching My Soul- Back to Basic” (REFER to https://undomiel84.wordpress.com/category/searching-my-soul-back-to-basic/). Looking back, I feel blessed and still couldn’t believe that the plan hatched two years ago had finally crystallized; and what’s more special was to be able to fly to the Holy Lands on my 30th birthday, on my very 1st of June 2014 birthdate! Masya ALLAH. God SWT works in the most mysterious way unfathomable by ephemeral minds of human.

Alhamdulillah. I never thought I would have the chance….. after 2 years of planning! AND on my birthday 1st of June as I am reaching 30 years old!

So, on 1st of June 2014, Mak & I were sent by the family to Kuala Lumpur International Airport (KLIA) before 12 p.m. as we had to gather for a briefing by Andalusia Travel & Tour team before our flight and entourage went aboard circa 3.00 p.m. I was already in my White Robe cloth a.k.a. “Ihram” (stitched clothes are forbidden) as my entourage was to head for Makkah first and in order to enter Makkah, one has to don the Ihram with “Niat” (intention) at certain places (namely “Miqat”) according to where you are heading from :-

The Miqat notification alert by the pilot via the seat screen in Saudi Arabia airline.

Firdous Al-Umrah, the hotel I stayed for a week in Makkah al-Mukarramah; circa 650 meter from Masjidil Haram. It was an alright one, not lavish but OK.

The road heading towards Masjidil Haram, encapsulated by tonnes of construction!

Once you are in “Ihram”, you have to sustain yourself from 13 forbidding rules (You can refer to various websites about them) such as not to cut any nails; not to wear perfumes, not to cover heads for men; not to engage in any sexual endeavors or any precursor to sexual dalliance; not to cut plants or kill animals in the Haram area,; etc. 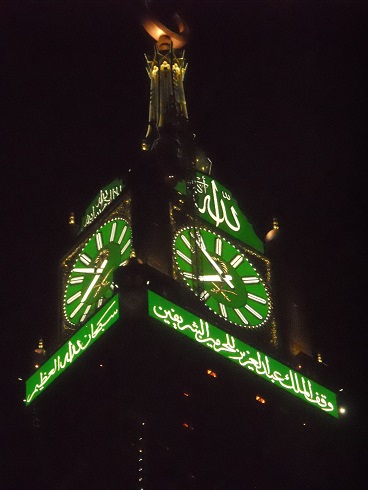 The Zam-Zam Clock Tower. Amazing! Subhanallah! With inscription of “La Illah Ha Ilallah” – There is no God except ALLAH.

Before I jot down more on my personal endeavors, I have to write a bit about the chronological processes of executing Umrah so that those who are not familiar might not be confused. The Umrah is called a ‘minor pilgrimage’ as it is more of a visit and with lesser compulsory rituals as in comparison to Hajj which definitely boasts a greater compulsory rituals as the ‘major pilgrimage’ (REFER to Wikipedia for clearer differences between the two : http://en.wikipedia.org/wiki/Umrah & http://en.wikipedia.org/wiki/Hajj . 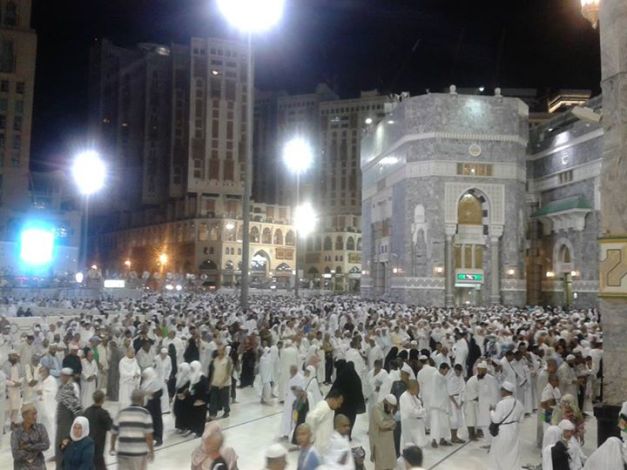 Seeing these crowd for the first time thronging Masjidil Haram makes me so awed!

Once, you are already in “Ihram” cloth/attire and enter the Masjidil Haram of Makkah, you will have to do these 4 other obligatory and compulsory rituals acts :-

One for the album!

Anyway, back to my own experience. The journey from Kuala Lumpur to Jeddah took around 8 hours via Saudi Arabia airlines. The flight was comfortable one (given the fact that I have always travel abroad via Air Asia X; so this one was considerably luxurious for me! Haha!). We arrived at the King Abdul Aziz International Airport, specifically for the Hajj and Umrah Terminal which was reportedly operating less than a week upon our arrival (told by our Mutawif. Not sure if I mistakenly heard this).

“Tawaf” or circumambulation around Kaabah. But we are not worshipping the Kaabah. This is a symbolic of oneness.

Anyway, the Arab officers are infamous for their “services-only-based-on-tips” and dilly-dallying so we have been warned that the process could take around 3-6 hours due to the negligence. But Alhamdulillah, our processes were smooth-flowing although I was stuck at the immigration counter for more than 10 minutes due to my passport picture with frizzy hair, in contrast to my nearly bald head now. I didn’t wanna say anything negative as people say it is not encourage to say bad things about Arabs as Prophet Muhammad SAW himself was an Arab and refrain people from talking ill things about the race irregardless the harsh and ruthlessness BUT all I could say, what people said were TRUE about the ethics and working culture of Arabians. Enough said? (,”)

Labbaik Allah humma labbaik
Labbaik la sharika laka labbaik
Innal hamda
Wan-ni’mata
Laka walmulk
Laa sharika lah.
O my Lord, here I am at Your service, here I am.
There is no partner with You,
here I am.
Truly the praise
and the provisions are Yours,
and so is the dominion and sovereignty.

Around 12.00 0’clock midnight (Saudi Arabia time), we arrived at our hotel, Firdous Umrah Hotel which is tantamount to 650 meter from Masjidil Haram. By that time, I was already feeling exhausted and wanted badly to sleep but Mak said we would be continuing the journey to perform 1st Umrah as we were still in “Ihram” state (which meant to say, the longer we were in “Ihram”, the longer we had to bear with the 13 prohibitions!). I was a bit startled because we haven’t been sleeping for more than 12 hours but Mak said that was how it would be. We were given 30 minutes to settle our baggage in respective room and then to gather at lobby to perform our first Umrah circa 1.00 o’clock in the morning! 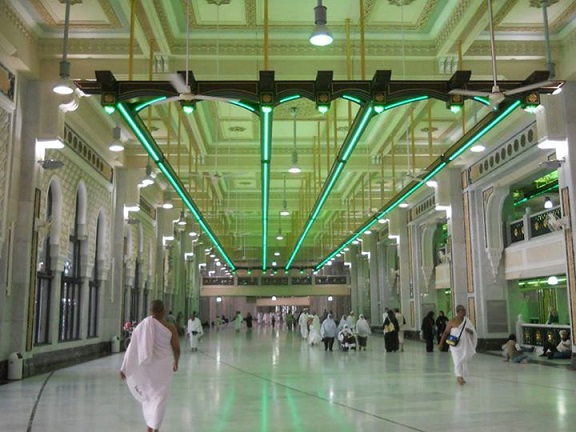 “Saie” where you run/walk back-and-from from Safa Hill to Marwah Hill for 7th times. The green lamp area indicated the area originally a steep-down-the-hill so males are encouraged to run a bit there. Women however are encouraged to walk according to their limited & demure pace.

Perhaps because I was so excited that the soporific mood was overcame. Initially we went there with the entourage but as we entered Masjidil Haram, Mak & I went separate ways since Mak already been there like 4th times now (2 times with our rich cousin who sponsored Mak & Ayah at As-Safwa & Zam-Zam Towers! Alhamdulillah for them; and 1 time of performing Hajj in 2012 – REFER to my entry at https://undomiel84.wordpress.com/2012/09/23/the-bride-of-the-red-sea-episode-iv-the-calls-of-the-black-house-parents-performing-hajj-labbaikallah-humma-labbaik/) and knew the nook-and-cranny there. I felt grateful to have Mak as guide for me to safeguard the procedures I have to thread upon while performing the rituals!

The first time I saw the Kaabah, I was disbelieved that I finally able to lay my eyes on the Black House erected by Prophet Ibrahim A.S & Prophet Ismail (Abraham & Ishamel) years ago and served as the Qibla for all Moslems in the world and the place I have been praying towards to my whole life! There is misconception about Kaabah that non-Moslems usually perceive; No, Moslems do not worship the Kaabah; it only served as the symbolic unification direction to the oneness of ALLAH SWT. So, we circulated the Kaabah 7th times (Tawaf) with me holding Mak closely as there were thousands of people circling the Kaabah as well with their own entourages hailed from different countries around the globe and SOME WERE REALLY HARSH by pushing people and couldn’t care less!!

My feet ached and peeled out. But this is nothing in comparison to sacrifice of Hagar towards Prophet Ishmael, searching for water in the barren land of Hijaz, until archangel Gabriel came and asked her to run back and forth from Safa Hill to Marwah Hill; where eventually the Spring of Zam Zam erupted out.

Anyway, since Malaysians follow the Scholar of Shafie (“Mazhab Shafie”), we are obliged to encircle the Kaabah WITH OUR LEFT SHOULDERS MUST BE PARALLEL TO KAABAH!!! Do not get confused with Moslems from other regions who might be following other Scholars that perhaps allow the people to face the Kaabah or frantically waving to the Kaabah! Yes, we are encouraged (“sunat”) to wave to Kaabah as we reach the Hajarul Aswad point by raising our hands and wave (“Istilam”) to Kaabah BUT for Scholar of Shafie, while doing it, THE LEFT SHOULDER MUST REMAIN PARALLEL TOWARDS KAABAH!! While we are performing Tawaf, we also must take ablution or Wudhuk. Of course it is impossible to retain the state of purity when thousands of men and women are gathering and pushing you while encircling the Kaabah, right? 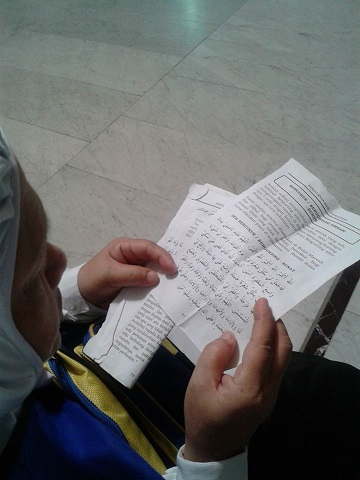 Mak perusing the scripture of Doa ought to be recited after Saie.

According to the “Muzakarah Haji Peringkat Kebangsaan Kali ke-21” which talked about this, it has been decided that for the followers of Scholar of Shafie, skin-touching between males and women while performing Tawaf WITHOUT any sexual arousal DOES NOT INVALID the Wudhu’ due to factors such as Rukhsah (enlightenment due to situation/Darurat and many more. You guys can check the details from other sources. 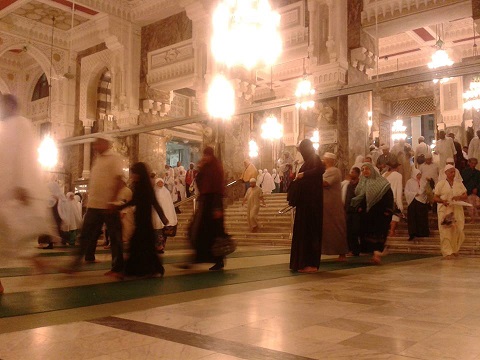 At the lower part of Masjidil Haram at the entrance of King Abdul Aziz. The cement was very cool. This was taken during the approaching of Fajr prayer. The place never sleeps.

Performing Saie was somewhat an eye-opener for me. To run back-and-forth from the hills of Safa to Marwah was a bit tiring. Yes, these days, the paths have been constructed into modern and cool mozaic pathways stretching 300 meter per a direction and air-conditioned as opposed to the scorching heat that once Hajar R.A. (Hagar) had to bear while searching water for baby Prophet Ishmael; BUT it was undeniably tiring when after you have circled the Kaabah for 7 times, you have to walk around 2.1 kilometer (7 times of back-and-forth from Safa and Marwah) ESPECIALLY when it was already around 2-3 a.m. and you haven’t been sleeping more than 14 hours!! But ALLAH SWT is Great; despite that, I had strength to complete the ritual; along with the small running at the “green-light-area” (used to be descending terrain from hill’s atop to the base) to signifiy Hagar’s frantic running searching water for Prophet Ishmael! This ritual act really humbled me about mother’s love; how a mother couldn’t bear the sight of her thirsty child and forced herself in spite of the hot weather! Subhanallah!

At the 2nd floor of Masjidil Haram. I always sat here. People kept busy by reciting Holy Book as well as praying. This is the place where you detach yourself from the world outside and focused to dedication to God SWT. Splendid!

After the 7th times run back-and-fro, we then proceeded to the last ritual which was to cut at least 3 hairs (Tahallul @ Halq @ Taqsir). With a few Doa, the Umrah finally done! Certainly for me, it was a great feeling to finally able to execute the Umrah for the first time ever! Alhamdulillah….. we stayed at Masjidil Haram until Fajr Prayer (“Subuh”) which was around 4.00 a.m BUT I had to confess that I was SO SLEEPY that my head kept lolled sleepily and I did went dozed off for several times and jerked my head surprisingly! After Fajr Prayer, we headed back to our hotel and had breakfast. 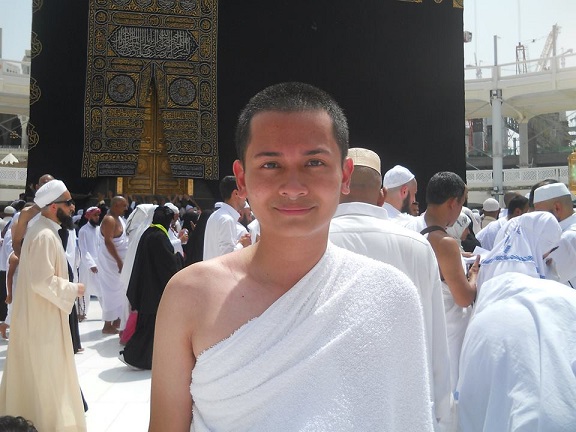 It was a great experience and I felt jubilant successfully executing the rituals of Umrah for the first time ever. More to come on the Holy Lands adventure in the upcoming entries! (,”).

5 comments on “The Bride Of The Red Sea (Episode XVI) : The 2014 Umrah (Part 1) – 1st Pilgrimage With Qarnul Manazil As Miqat @ Makkah al-Mukarramah.”