A Tragic Estuary Of Racism & Raucous : A Caucasian Father’s Love To A Half-Malay Daughter @ “Almayer’s Folly” By Joseph Conrad.

Posted by Shahrill Ramli on July 3, 2015
Posted in: Novels/Book. 4 Comments

I have finished the 3rd book within this 3 months hiatus from my UPM Master’s Degree (June-September)! Finally, I’ve read “Almayer’s Folly”, the celebrated 1st novel written by Joseph Conrad which depicted the setting of Borneo and the cultural clashes between the White Men colonists who unabashedly regarded themselves as superior to any other races on this planet (still do!) and the submissive Malays, oppressed in their own motherland.

Reading “Almayer’s Folly” brought somewhat an ironic feeling, after reading the paradigm-shifting “The Malay Dilemma” (REFER to https://undomiel84.wordpress.com/2015/06/29/a-sine-qua-non-for-the-malays-a-paradigm-shifting-disclosure-tun-dr-mahathir-mohamads-1970-the-malay-dilemma/) where the former revolved around the White Men ridiculing the oppressed Malays whereas the latter upheld the sentiment of Malay supremacy. Still, it is enthralling to read a South-East Asian setting in a novel written by a Westerner around 100 years ago. To be honest, I never knew about the novel or the author until I saw the trailer of the film adaptation, retitled “Hanyut”, directed by renowned Malaysian director, U-Wei Hj Shaari – in You Tube circa 3 years ago. The clip captivated me as I read the synopsis via Wikipedia but only last week I finally made the decision to buy the book by using the remaining Baucar 1Malaysia at Kinokuniya KLCC (after calling and scouting at various bookstores!). 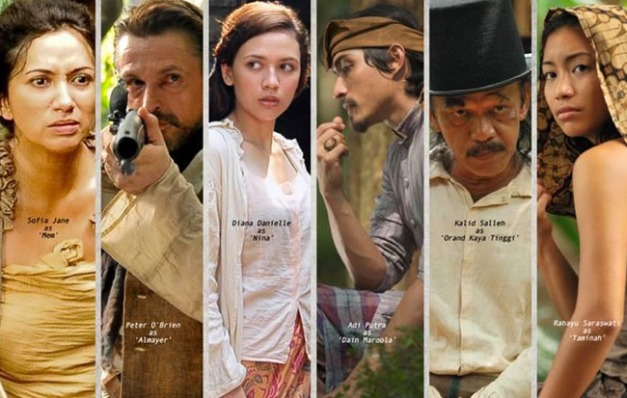 Kasper Almayer was a Dutch trader (reportedly inspired by real-life eccentric William Charles Olmeijer, a Dutch trader which Conrad encountered in Borneo) who lived at Sanbir, near the riverbank of Pantai River. He was asked to marry a Malay girl, the god-daughter of a renowned English seamen, Captain Lingard. Reluctantly, he married the Malay girl although his heart loathed Malays as the coloured race and of course, beneath the superiority of a White Man. Soon, they had a “half-caste” (derogatory term for child of mixed parentage) daughter named Nina Almayer. Although Almayer hated his wife but he loved Nina dearly. He wanted to raise Nina in a cultured European tradition and aspired to gain wealth for Nina and him, and soon fled Sanbir away and to settle in European continent. In order to crystallize his dream, he sent Nina to Singapore to be raised in a cultured European aristocracy and couldn’t care less about his wife’s feeling, Mem Almayer.

Several years later, Nina came back to Sanbir as a ravishing young lady. Her return sparked interest by many suitors including from the Arab clans who notoriously toppled Almayer’s business in Sanbir. Reshid asked for Nina’s hand into marriage but was rejected by Almayer. But one man attracted Nina’s attention; it was Dain Maroola (perhaps derived from the Bugis’s name “Daeng”), a Bali Prince whose kingdom was in clash with the Dutch. Dain and Almayer had agreement to smuggle gunpowder. 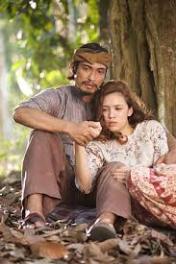 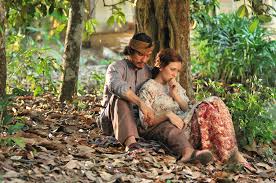 Unfortunately, the Dutch was spying on Dain and attacked him, killing two of his men. Planning to escape from Sanbir as well as eloped with Nina, Dain sought the help of Mem Almayer who secretly had been aspiring to ‘seek revenge’ over Almayer. She wanted Almayer to feel the pain like what he did to her and she also wanted to keep Nina in the Malay circle; and not to be snatched away into the ‘evil’ White Men society. A slave-girl called Taminah who harboured romantic feeling towards Dain Maroola told Almayer about it as well as to the entourage of Dutch army. Almayer was angry and confronted the couple. In the end, Almayer helped the couple to escape albeit vehemently claimed that this was the only way for him to forget the treacherous betrayal that Nina had done to him. 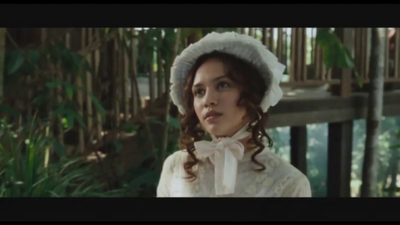 It was tragic to read how in the end, Almayer resorted into denial and kept vehemently repeated to himself – “I will not forgive you, Nina” – and to help himself forgot Nina, he burned the dilapidated house he erected at the riverbank of Pantai River and gradually, became crazy (he was described as to be kept talking to himself, picturing an image of a child; sometimes alone at night). Finally, Kasper Almayer died of frustration and loneliness. 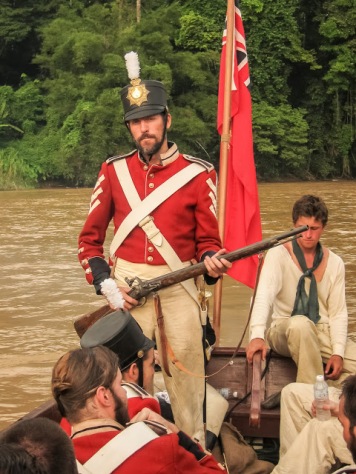 I have to say initially, I was a bit grossed with the protagonist’s theme of his White Man supremacy and how he looked down at coloured people (especially Malays). Nevertheless, the ending was tragic and I felt twinge of sadness for Kasper Almayer. Although the daughter was half-white, he didn’t renounce her but loved her dearly. It is sad to know that he then went crazy and died. It is a symbolic way of how deep a love of a father to a daughter. On top of that, it was also interesting to discover about Nina who was in a dilemma between two races. Her exotic beauty was the source of jealousy as well as attraction. But the White People society did not appreciate the ‘coloured’ heritage of her, in page 25 :-

“Let her stay with you. She was never happy over there. They slighted her. You can’t make her white. It’s no use you swearing at me. You can’t. She is a good girl for all that, but she would not tell my wife anything”.

I also loved the way Conrad justified the affinity that Nina had for the Malays in comparison to the White People; which usually a common thing happening amongst people who are of mixed parentage (they are drawn to the dark society as the white society tend to reject them due to their physical differences). I have written this polemics in my blog in 2008, citing the experience of Halle Berry with the racist “One Drop Rule” (REFER to https://undomiel84.wordpress.com/2008/11/11/black-or-white-discover-the-dilemma-of-biracial-mulatto/). This was stated in page 35:-

“To her resolute nature, however, after all these years, the savage and uncompromising sincerity of purpose shown by her Malay kinsmen seemed at last preferable to the sleek hypocrisy, to the polite disguises, to the virtuous pretenses of such white people as she had the misfortune to come in contact with. After all it was her life; it was going to be her life, and so thinking she fell more and more under the influence of her mother.”

A father’s love to a daughter.

On whole, this a tragic one for me. I am looking forward to read Conrad’s other novels in his “Malay Trilogy” (of which Malay Archipelago as the setting of these novels). Another mind-enriching for me to be able to read another classic and celebrated pieces of mind, siphoned out from a great author!

4 comments on “A Tragic Estuary Of Racism & Raucous : A Caucasian Father’s Love To A Half-Malay Daughter @ “Almayer’s Folly” By Joseph Conrad.”