Posted by Shahrill Ramli on March 25, 2016
Posted in: Novels/Book. 3 Comments

I am not well. Perhaps the scorching weather with its ruthless Equinox and El-Nino has been taking toll upon me. My tonsils enlarged and predictably, that sucked me into feverish and lethargic states. I have been reading the renowned book by Haji Abdul Maliksyeikh Abdul Karim Amrullah who is famous with the acronym HAMKA entitled “Tenggelamnya Kapal Van Der Wijck” (The Sinking of Van Der Wijck Ship) and managed to complete it within 2 days.

Excellent book. I ordered it & bought with the help from my “Pusat Sumber SK Serendah” teacher-colleague, Kak Hamidah.

I have to say that the book is very attractive and among the BEST ORIENTAL/MALAY/INDONESIA BOOKS I have read! HAMKA used the point of view of a third party approach to narrate the story and the usage of the language was unique. Simple yet the idea was well-translated and as reader, you could feel the soul of the sentence and the feeling that he was trying to capture within those words. 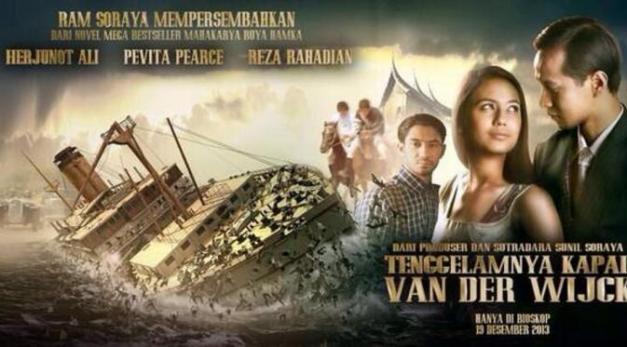 Apparently, the novel has already being adapted to Indonesian silversreen in 2013. Can’t wait to see this!

This novel was a story of a young man, Zainuddin who is of mixed parentage (Minangkabau and Makasar) and he fell in love with a Minang girl named Hayati. Zainuddin was rejected by the Minangkabau people and his intention to marry Hayati was denied due to his mixed parentage – the Minang really uphold their “pure breed” and clan-relationships. Despite that Hayati and Zainuddin were still adamantly in love and Hayati gave her words that she would be waiting for Zainuddin. When Hayati was invited to the town of Padang, she soon became intoxicated with the modern life and attire and her infatuation towards Zainuddin was meddled with the presence of Aziz, her friend’s brother. Soo, the romance towards Zainuddin withered and Hayati broke her promise and wedded Aziz. Heartbroken and almost killed himself, Zainuddin fled to Jawa and soon became a famous writer. Fate destined them to meet again when Hayati and Aziz also moved to Jawa and the latter resumed his dark past as womanizer and gambler.

Zainuddin and Hayati in Padang Panjang, Sumatra. Before Hayati drifted in the hedonistic world of modernism.

I am not going to write the whole plot but what I could tell is that since the setting of the story was during the Dutch occupation in Indonesia, the Dutch terminologies were quite many in the novel (that explains the name of the ship Van Der Wijck, the ship of which Hayati boarded to go back home to Sumatra from Jawa). You could also tell that HAMKA was a diligent and well-read man because he made comparison of Zainuddin-Hayati to the characters in “Count of Monte Carlo”, Edmond Dantes and Mercedes (Luckily I read “Count of Monte Carlo. That is why I am familiar with the names!) as well as the triangle love story of Cleopatra-Julius Caesar – Mark Anthony!

Hayati and Aziz; the man she was enamoured with and accepted by the Minangkabau’s clans.

Reading this novel makes me ponder. It is not cliche, it is smithereens of real life story and those who ever felt the wrath of love would understand that. I myself had wonder whether :-

“Demikianlah perempuan. Dia hanya ingat kekejaman orang kepada dirinya. Walaupun kecil dan dia lupa kekejamannya sendiri kepada orang lain walaupun bagaimana besarnya.” (That is woman. She only remembers the wrath of others towards her. Although small and she forgets her own wrath towards others although they are big). – HAMKA.

To be honest, I am now angry because I felt that I am just a decoy to assuage loneliness. Yes, although we have call it off but there were still interactions and I even get the messages from the Haramain that someone was performing Umrah (which was initially my idea to get that peaceful minds). But now it has been more than 3 weeks; I am sure that someone is already back here but yet to contact me. I understand, perhaps that person is still in the “piety moment” (just coming back from Haramain!) and want to “stay clean and avoid any contact with malicious dirty affiliations”. My anger is more on – what if suddenly I got a message to rekindle? Would I strike to the face or bend my ego? My heart is pounding with anger as I am jotting this! But when I think about the ending of this novel, it only will hurt both parties.

I am proud that finally, I’ve got the chance to read this prestigious book by HAMKA. Well, even my father and mother read this during their school days! Amazing piece of work that really pierced my heart.

Perhaps, I myself will be sinking together with my own Van Der Wijck? Goodness knows.

The trailer of the film version! I must watch this!!