Posted by Shahrill Ramli on July 11, 2016
Posted in: Travelling - Out From Chrysalis. 3 Comments

We took the Intercity Train from Amsterdam to Brussels, Belgium. The journey took us approximately 3 hours. From the cool Amsterdam, we were welcomed with the real summer treat at Brussels. It was indeed a tropical feeling at Brussels; just like our very own backyard in Malaysia! Haha! 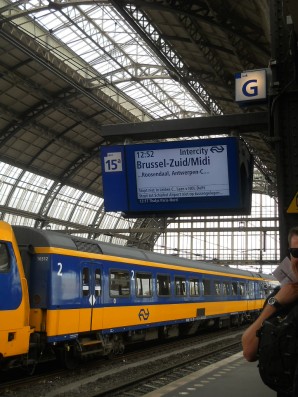 Starting to read the 6th book from my Baucar 1 Malaysia books. This story book is written by my Penang Free School supersenior, Winston Lim! (,”).

We boarded down at the last station which was Bruxelles-Midi / Brussels-Zuid. From there, we decided to walk to our Belgium lodging; which apparently the hotel that my sister and her family resided during their European tour prior coming back to Malaysia from their Leeds one year stint. It was approximately 1.4 km (wow, we burnt so much calories! Haha!) from the station to Hotel Barry, situated at Anneessens (You guys can check the website at http://www.hotelbarry.com/).  It was actually something you can opt not to do because the hotel situated only 2 statations away from Bruxelles-Midi / Brussels-Zuid. – which were The Lemonnier and The Anneessens. The hotel situated a stone-throw away from The Anneessens station which also happened to be the boarding out station if you want to visit The Manneken Pis. 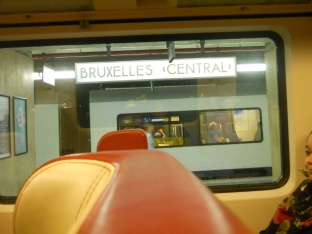 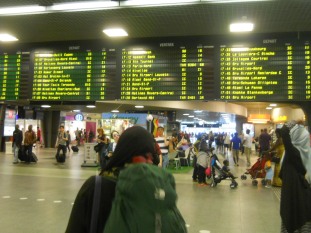 Bruxelles-Midi / Brussels-Zuid, our terminal at Brussels.

Our schedule in Brussels was somewhat a relaxing one. We only spent 2 nights in Brussels and took our own sweet time immersing with the local culture. I notice that Belgians speak French. I was a bit taken aback by that because Belgium is not that far from Netherlands and by right, the latter should have eminent influence towards the former because the latter was once a great colonizing power and even reached our Malaysian shore at Malacca as well as the great conquest of Indonesia, no doubt. I am always marvelled with all these facts about cultures and sociology whenever I go to new places. So of course, to alleviate my curiosity; I checked Mr. Wikipedia (lol) and apparently, there was this sentiment called “Francization / Frenchification of Brussels” (REFER to https://en.wikipedia.org/wiki/Francization_of_Brussels). No wonder everyone was uttering “Merci” and “Bonjour” instead of “dank je” and “Goedemorgen”! Interesting, isn’t it? 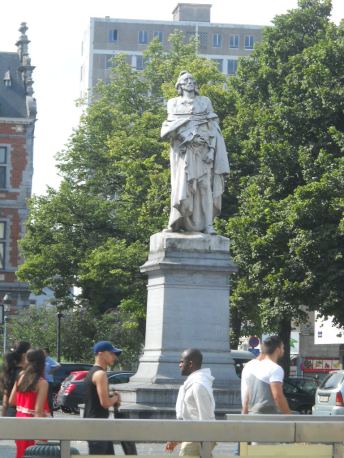 A statue in front of our hotel. Apparently, this was the historical legend Frans Anneessence. He was beheaded. Read more at https://en.wikipedia.org/wiki/Frans_Anneessens.

Our first tourist spot was the famous Manneken Pis. It was a statuette sculptured as a boy urinating and definitely his “birdie” is visible (uncircumcised, for sure! Haha!). Honestly, I didn’t see why the fascinating attraction and it would be quite no-brainer if it wasn’t for a famous tourist spot when you see crowd thronging in front of the statuette just to get themselves photographed with a pissing statuette; and that includes Yours Truly! Haha! But of course the historical part was somewhat quite intriguing. A version speculated that the statuette was erected to commemorate the event when a baby prince was hid in a basket during war and somehow he decided to pee in front of the troops of army! 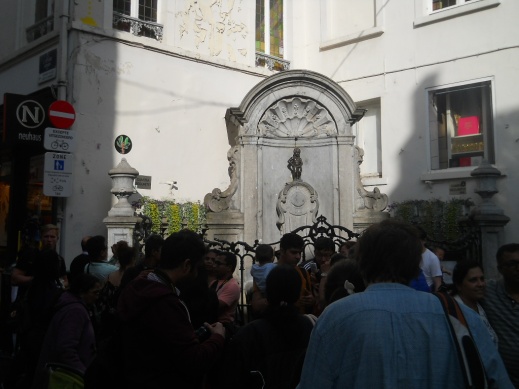 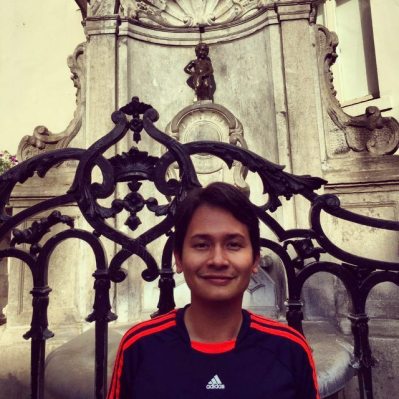 One for the nostalgia at The Manneken Piss. Luckily, he didn’t piss on my face! LMAO! 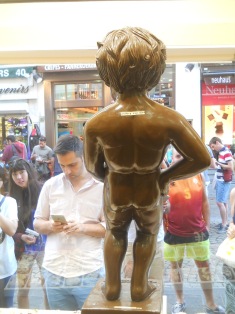 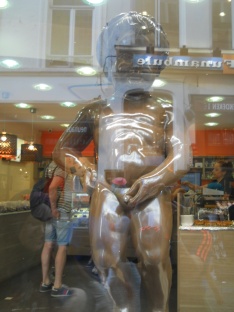 Seriously, a chocolate Manneken Pis?? I wonder would anyone buy this and I wonder which part they will devour? LMAO!

Anyway, you could see a lot of chocolate shops as well as souvenir shops along the pavement walk nearby The Manneken Piss statuette. I am not a chocolate aficionado unlike my sister but she insisted that I have to try the waffles as Belgium is famous for that! So, we ordered waffles with banana as well as ice cream scoops with chocolates. Well, my sister enjoyed that immensely but I on the other had, thought it was just OK. Haha!

The famous Belgian waffles. My sister is a chocolate aficionado. I, on the other hand is merely a mediocre consumer.

Then we moved to The Grand Place (Grote Markt), one of Belgium’s outstanding landmarks. Apparently, it was once a place where Belgians did their trade and transaction affairs. The centre area was “walled” by majestic-looking buildings and there were a few al fresco restaurants for people to enjoy their evening chit-chat (very typical European style). Nevertheless when we visited this area, seemed like there was to be some important event as stages were set up and cranes were erected. 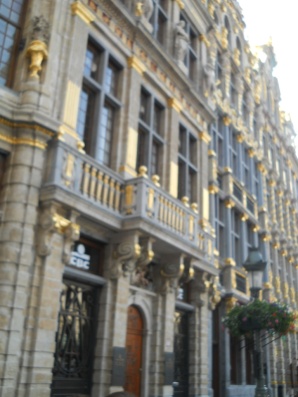 Majestic features of Grand Place (Grote Markt). I love the imperial architecture. Seems like the days Anastasia Nicholaevna was born (I really wanna go to Russia, too!) 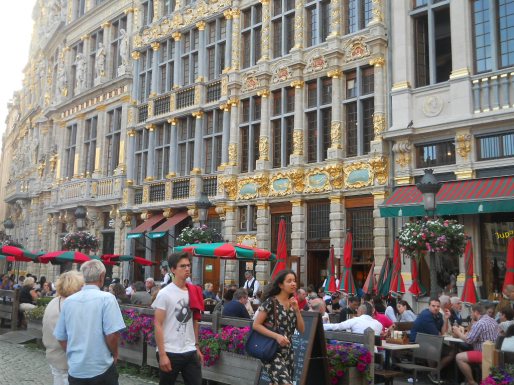 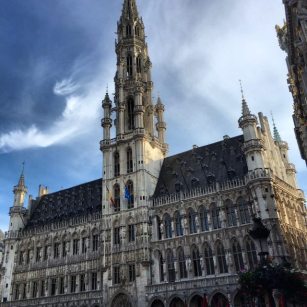 My classic levitation pose for every vacation trips! You Only Live Once. YOLO. I don’t liek to be caged. I like to be free. Don’t you understand?

The next morning on the 11th July 2016; we decided to visit Mini Europe in Heysel. Basically, it is park which ensembles all the national iconic landmarks of the European countries – a symbolic to cement the association of their European Union. It was indeed nice to marvel the efforts made to construct the miniature versions of these landmarks (kudos to the builders!) but what most important thing is to witness the “brotherhood” or brethren spirit of the European countries! I think we Asians or specifically Malaysians should emulate this INSTEAD OF FIGHTING AMONG EACH OTHER, no??!

In front of Atomium, the symbolic building of Science Expo next to Mini-Europe. But we didn’t enter as it is costly. Haha! Being a cheapskate is a must when you do backpacking traveling.

Some of the miniature buildings erected. Awesome!

If you love history or human ecology and civilization like I do, I am sure you have good time being amazed by these.

Amazing miniatures! Don’t you feel like a giant gawking to destroy the towns? Haha!

It was so surreal that suddenly, my sister and I found out that there was a Harry Potter Exhibition being held at a nearby venue called Palais 2; not far from the Mini Europe area! Unfortunately, “walk-in” tickets were sold out and people were queuing up to buy tickets for the next day. Too bad because we were not going to spend another night in Brussels! Sigh. But well, the entourage would be coming to Singapore; so we’ll see if I really want to go.. or not! Haha!

Very detailed construction and architecture! Kudos to them!

On the way back, we went to a Halal fast food outlet called “Tonton Chami”. Apparently, it was Belgian local brand and I was shocked to hear Maher Zain’s song played (remind me of someone who once dedicated Zain’s song song to me!). It struck me that the Muslim diaspora is so vast in this world. We share the same faith and understanding and bond; and yet we fight among one another. That is sad. 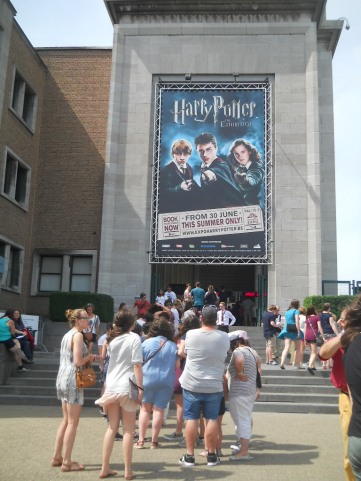 The Harry Potter exhibition. Too bad; tickets were sold out!

On whole, our stay in Brussels was a casual one. Honestly, I prefer Amsterdam to Brussels due to the weather as well as the surrounding. Perhaps this was an unjust opinion as I was in Brussels for merely no more than 3 days and didn’t really explore the whole country or the town itself – but I felt that Brussels has the  eminent “ghetto” ambiance whereas Amsterdam is more of a cultured society. Nevertheless my sister prefer Brussels because she felt that with minorities in Brussels and every now and then you could see veiled Moslem women pass by; she didn’t feel she was perceived negatively or being judged pessimistically as she was not alone. She spoke from her opinion living in abroad where xenophobia and Islamophobia are evident; so I guess she has valid point. But for me, I am more attracted to the racial melting pot of Netherlands  well, too soon to summarize but I have no qualm to admit that I am enticed to that idea.

Apart from that, we could also see there were a lot of soldiers patrolling train stations or public amusement parks! It really seemed like the movies where you see European soldiers surveying the subjects with their big guns. Intimidating, though. We asked around but Belgians also did not say much about that and uttered “probably due to security affairs”. Naturally, I searched Internet and I found this article (http://www.huffingtonpost.co.uk/jonathan-arnott/army-on-the-streets-the-d_b_10241380.html) which probably best answered my curiosity – and of course, these are all counter-terrorism movements which was fueled by the bombing in Brussels; believed to be done by ISIS (REFER to https://en.wikipedia.org/wiki/2016_Brussels_bombings). 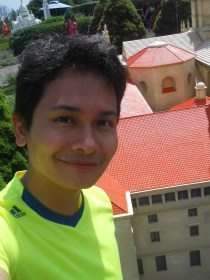 This trip also opens my eyes about the wrath and seriousness of the terrorist attacks in the European region. It is intimidating but hopefully, ALLAH SWT will protect us. It is sad to know that some people keep misusing the name of Islam again and again and again – and the image of Islam is continuously painted as the Black Scapegoat. May all goes well; for the humanity and People of The World irregardless race or religion.

Soldiers are everywhere. You’d think you are in a warzone! An eye opener to the seriousness of the state. Some people keep abuse Islam again and again and again. Sigh.

We pushed off from Brussels across the English Channel to London via Eurostar train. Took us 2 hours to reach London, with distance of 373 km! Easy, breezy but costly. (,”).