Inalillah : An Ode to A Cancer Fighter – Life Is Ephemeral, Memory Is Eternal.

I am shocked. An acquaintance, a friend passed away due to tongue cancer. I am shaken. Although I knew him from FB, I made an effort to visit him circa 5 months ago when he was warded at HUKM. I didn’t know why I did that but I felt like I needed to visit him and I am glad I did. 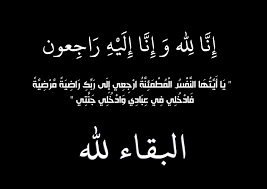 I remembered that I used to interact with him around 2015 via Facebook and suddenly, he was out of the radar. I thought maybe I have offended him in someway (you know in Facebook, right?) and it took me around 2-3 months to holler him to ask if I have offended him. I was shocked when he told me that he was battling tongue cancer. From that day, I have been asking him about his health via Facebook and WhatsApps – almost once every two-three days…. 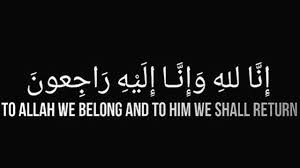 He told me about this one “underground sustenance” he got to alleviate his pain. I thought that it did good to him as right after I met him, he was feeling good and planned to join the Kapas triathlon event, if I am not mistaken. But then he aborted the mission as he got sicker. Although I didn’t know him that well, I feel like I need to constantly give him motivation. I don’t know; maybe it is because I am a teacher, I am full of empathy? Once a while I teased him just to lighten up situations when he was telling me about the hardship he faced battling the cancer. He also showed me wires on his body when he was having treatment for the cancer; and shaved his head. 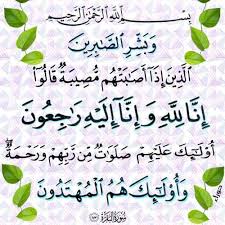 Once I uploaded a picture of “tapai” and then he commented that he wanted to eat “tapai”. I jokingly said of course I would bring “tapai” for him the next time I visit him but I think that circa a month later he told me that his mother made him the whole pot of “tapai” for him. 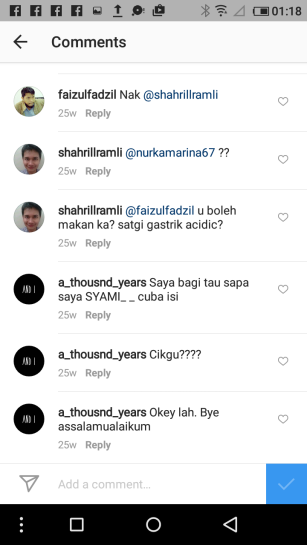 Our conversation on “tapai” in my Instagram. There were other conversations – some were cheeky jokes but all in the mood to lighten up the mood. I feel sad thinking about this. I don’t know, maybe I am sensitive. Inalillah. 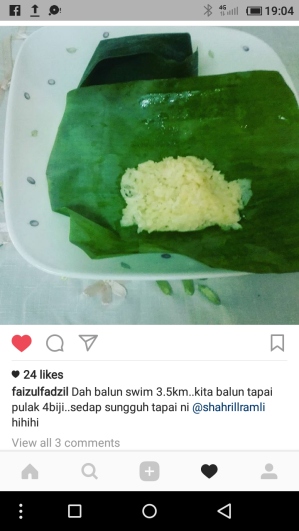 His picture in Instagram. He was teasing me about his homemade “tapai”. Life is ephemeral but let the memory etched as eternal.

I only met him once but I guess that is the power of Facebook. It is the power of constant interaction. There were so many conversations running though my mind now. What make me so shaken now is that my last conversation with him was yesterday, Monday night circa 10.00 p.m. when I messaged him asking “How are you?” – He told me that he was in pain as ulcer was spreading in the mouth due to radiotherapy. Seeing that conversation, again and again makes my eyes water. 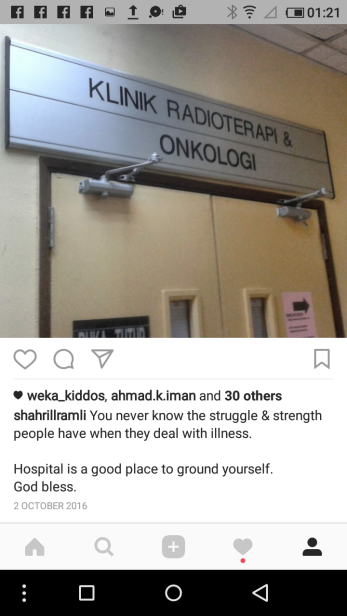 The day I visited him. I am glad I did…

As a friend, I told him I “niat” my prayers at Masjidil Aqsa to him; hopefully that ALLAH SWT will ease his pain – true that now ALLAH SWT has indeed saves him from the pain. He jokingly teased me that I won’t have any problem in Israel as I looked like Orlando Bloom ala Jew-face like. Haha! I don’t know. There are so many things I’d like to write. But I lost my words. I may not be able to sleep tonight. I don’t know why I feel this. Maybe I am a very touchy and sensitive person, like he said.

When he was a healthy, active bloke. 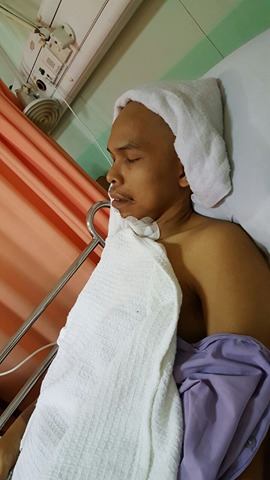 A picture that he shared with me after a surgery on the throat. What a fighter. Inalillah, my friend. He did type to me once “when we are sick, we long for the health we take for granted”. So sad.

I still can’t believe it as you are a fighter though once a while you can’t help but to lament that “everyday you cried”. I feel sad but you are now relieved from the pain, my friend. Inalillah to my dear friend, Faizul Anuar Fadzil. Who also happened to be a Kedahan hailed from Padang Sera. I am glad I visited you and keep giving you motivation and Doa till the end – the least I could do as friend. You are in my prayers. Amin. 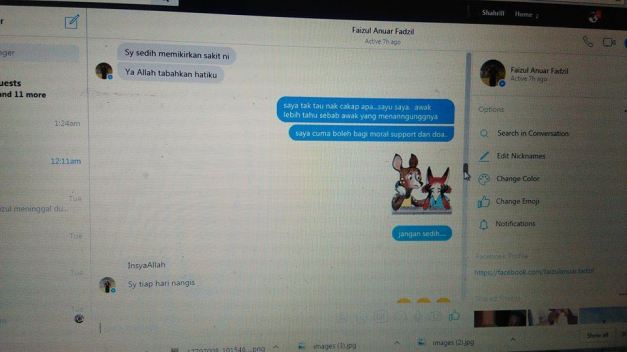 A conversation with him. This bits really make me in melancholy. But ALLAH SWT has the best plan to release him from the pain. Could it be that a prayer at Masjidil Aqsa proved to be Hallow? Wallahualam. God Is Great.