A Satire Towards The American Egalitarian Spirit : Defying The Apartheid, Sexism & Societal Segregation @ “To Kill A Mockingbird” By Harper Lee.

Posted by Shahrill Ramli on July 20, 2017
Posted in: Novels/Book. Leave a comment

Finally, I can be proud that I’ve successfully read the celebrated, Pulitzer-Prize winning novel by Harper Lee, “To Kill A Mockingbird” after twice futile attempts in the previous years! Haha! Now, this novel is far older than I am, being released in 1960. I have been hearing rave reviews about this novel so I told myself that I have to read this to evaluate myself! 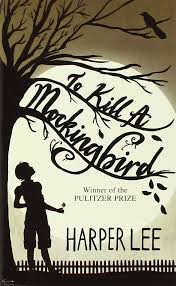 At the essence, this story presents its protagonist in the form of an 8 years old girl named Scout Finch. She and her brother, Jem Finch lived in a town called Maycomb in Alabama during the 1920s where racism, sexism and societal segregation were still very much prevalent. From the eyes of this little girl, readers are taken to witness the bricks and bouquets of prejudice and how the very thoughts of the untainted innocent minds could be taken into consideration by the “learned” adults. Apart from that, fatherhood also was highlighted in this novel in the form of the unique bond between Scout Finch and her lawyer father, Atticus Finch.

The character, Atticus Finch as a lawyer is defending Tom Robbinson, the alleged black man who was accused to rape a white woman.

Readers were taken to the time where apartheid was intact; Black People worked as slaves and maids in the Caucasians’ households. It is interesting to the dynamic interaction between Calpurnia, the Finch’s maid with Scout. As a boisterous girl, Scout hated the idea of having Calpurnia being so strict upon her and reprimanded her for not being a ladylike, yet she adored Calpurnia as a mother figure and treasured her cooking skills. Nevertheless, Scout never saw Calpurnia as a stranger although she was black. The kids (Jem and Scout) even joined Calpurnia to a black people’s church and Scout was written as to feel that she would want to visit Calpurnia’s family in the next future. Apart from that, the derogatory term “nigger” is used vehemently in the dialogue. Yes, we know that Caucasians do use this term casually when they are interacting among them – but it could be viewed as non-sensitive. But maybe Harper Lee was trying to inject that “naked truth” feel to the plot of the novel, I do not know. 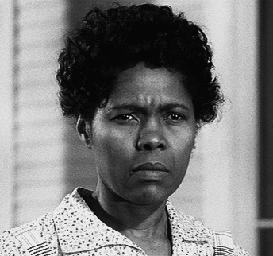 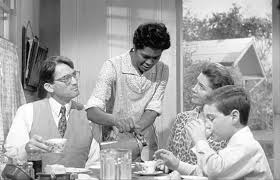 Calpurnia, the black maid of The Finch. She treated the children just like her own children – being a strict motehrly figure and a disciplinarian.

The heart of this story lies on the raping accusation by a white woman, allegedly to be committed by a black man. Through this scene, readers are taken into the myriads of pride and prejudice of the apartheid sentiment – where a white man’s word will always supersede a black man’s. I love the dynamic of this confrontation but unfortunately it was merely etched as a portion of the whole plot; personally, I think it would better if the book was wholly dedicated to the case; and that would be such a thrilling plot! 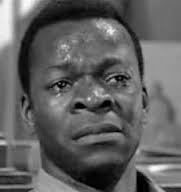 A scene at the court where the white woman (Mayella Ewell) who claimed to be raped by the black man (Tom Robbinson) was cooking up stories.

As for sexism, Harper Lee illustrated the polemic through the ideas of that there were no women serving as the jury members, simply because of the sex! It got Scout to ponder for a moment and questioning that. For societal segregation, it is interesting to note that apart from apartheid, the Caucasian themselves are segregated into different clusters and strata. The Finches, who were considered as one of those old and elite families in Maycomb were generally respected by the people in the town but not for the “White Trash” families such as poor The Ewell family. It was stated by Aunt Alexandra Finch that people like them don’t mix with people like Calpurnia (black people) and also The Ewells (White Trash). From this, we could see the reality reflection of our society; the very existence of those who favour societal classes – and those who opt for egalitarian society (Atticus Finch). 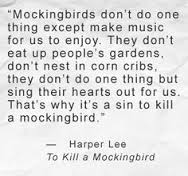 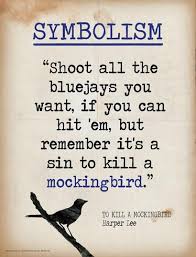 Some of the memorable quotes from “To Kill A Mockingbird”.

For me, “To Kill A Mockingbird” was a good novel but I wouldn’t rate it as great although I admire the moral values embedded in it. One memorable statement from this novel would be “it is a sin to kill a mockingbird”, when loathing a black man was likened to a mockingbird. I just wish that the rape case was lengthened as it gave such dynamic for the plot and the characters – nevertheless, this novel was undeniably a good read, for me!

The film adaptation trailer of “To Kill A Mockingbird” in 1962.