The Islamic Side of Promiscuous Patong : A Monsoon Beach Life & Discovering The Malay Diaspora @ Phuket, Thailand.

Posted by Shahrill Ramli on June 21, 2018
Posted in: Travelling - Out From Chrysalis. Leave a comment

Asean offers a lot of adventures and new places. I admit that I used to have that “colonized mindsets” that to explore the world was to venture out the Caucasian-dominated countries – Europe, Australasia, etc. But last year’s experience to Vietnam (REFER to https://undomiel84.wordpress.com/2017/07/06/my-vietnam-eid-experience-ho-chi-minh-the-asean-halal-tourism-the-grandeur-of-french-indochina-architecture-the-american-conquest-of-miss-saigon/) had changed my perspective and I now know that each country has its own gems to be savoured and appreciated. Anyway, it was actually an eleventh hour plan. My sister and I had that mutual consensus circa on the 24th Ramadhan and it was agreed that we would be flying off to Phuket, Thailand of the 4th Eid of Syawal (18th June 2018). 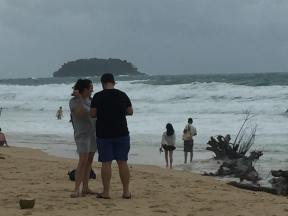 The Andaman Sea tidal was so ferocious! I have never seen wave like that!

I flew solo via Air Asia while Kakak flew with both my nephews via Malindo Air. Abang Zam, my brother-in-law, however, would fly over to Phuket on the day after via Air Asia due to some professional errands. I arrived earlier at Phuket International Airport as at 7.05 a.m. and waited half an hour for my sister and nephews. We then negotiated with the car dealers at the airport and decided to take a Toyota Vios from ASAP (REFER to the website at https://www.asapcarrent.com/en) for 3, 354.45 Bahts throughout 3 days. By using Waze/Google Maps, we drove all the way from Phuket Airport which is situated at the north side of the island to Patong Beach, situated at the west side of the island. The journey took around 2 hours, given the nature of weather and traffic.

Look at them. So brave! Hahahah! Very nonchalant and couldn’t care less about the waves. Eeeks! 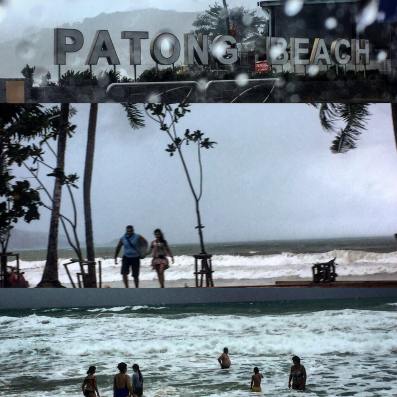 We explored Patong Beach as we arrived early at the area and our hotel check-in time was at 2 p.m. It was so intimidating and eerie seeing the ferocious wave of the Andaman Sea crushing the beach but you could see that some tourists were nonchalant by that – they kept swimming and to the extend of going towards the middle parts of the ocean! Perhaps, they were good swimmers? Anyway, it was also ethereal to experience that kind of atmopshere – and I had that spontaneous empathic feeling, wondering what must have been like to be trapped in an area when the deadly 2004 tsunami hit the shore of Phuket? Nauzubillah.

Our budget hotel, The Capitano Beach Hotel. Do check it out, folks! My sister is good with this. 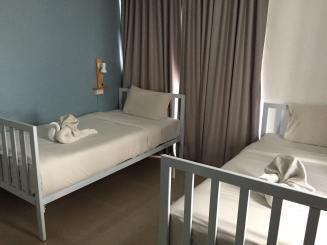 The cafe. But there is no service at night. And my room with Rifqi.

As it is now a monsoon season, rain and strong current of the ocean are already expected (so, island-hopping was definitely a no-no). We got the shock of our life when we saw the tidal became too ferocious and the splash could be seen at the terrace brink of the beach! Haha! Our lodging, Capitano Hotel was a budget hotel with Grecian influence. You could see the vivid Greek flag colours – blue and white dominated the interior hues of the hotel. Rifqi and I were in a room with 2 single beds (as I would be going back two days earlier than them due to my UPM’s Comprehensive Exam) while Kakak and Raess were in a bigger room with two Queen beds. The hotel was cozy with cute balconies to hangout. We just spend our first day being the lazy sloths as we were so tired. 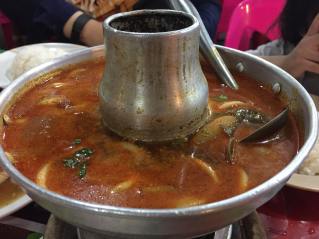 Kusuma Seafood Alley Restaurant. A Halal-certified place. It has only small kitchen but the service was rather swift. 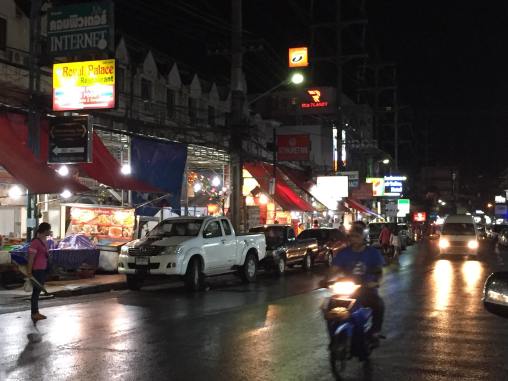 Nevertheless we had another experiences when the hotel suddenly experienced electricity glitch! Everything was pitch black and we could hear the wind was howling like crazy outside! When I looked outside, I saw leaves of the coconut trees blown by the monsoon wind, and I have to admit that in my heart I was praying – “Ya ALLAH, please don’t let it be another tsunami!” We couldn’t use the tab or taking bath as perhaps the water refilling was electrically-controlled by the machinery? Anyway, it was solved around 40 minutes although we actually experience two times of these electrical fiasco (my sister was thinking of moving to another hotel!). That night, we went to a Halal stall named Kusuma which was a mere stone-throw away from our hotel. It is amazing to converse accented-Malay with the owner and savouring the same familiar Thai delicacies just like back in Malaysia. I guess this was an eye-opening experience for me on the breadth of our global Malay diaspora population (all this while, I only watched these in TV documentaries or read but this time, I witnessed this myself).

The exterior design, the minbar and the staircase leading up to the prayer hall. All for #ShahrillsJejakMasjid craze.

The ablution section and the interior design of the dome.

On the 2nd day, which was on 19th June; Kakak fell ill. Her stomach was feeling very uneasy and she became lethargic, pale and nauseous. Since she is the leader of the pack and I couldn’t drive a Vios (would learn this later on using my mom’s Vios!), our mobility was almost crippled. So, I thought of just walking to the Patong Mosque as I estimated that it wouldn’t be that far (saw the building in the car on our first day). So, Rifqi and I walked; by relying on the public WIFI which occasionally disappeared! We were walking for 40 minutes and it was raining heavily – and I realized we were actually walking to the opposite direction away from the mosque! Haha! So, Rifqi and I practically ran under the rain and took a shelter at a shopping mall called Jungceylon. It was a memorable experience, though, bonding with my nephew. Haha! We finally arrived at the mosque via the car as Kakak managed to pull strength to drive – since a Halal restaurant was nearby the mosque. It was nice seeing the Islamic element though you are far away from Malaysia. The feeling of unison was eminent.

Enchanting architecture, isn’t it? The beauty of Siam. 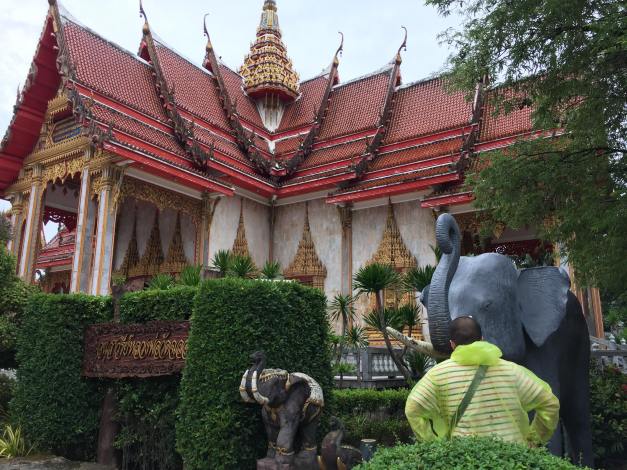 Can’t help but felt as if you are in the film “Anna And The King” or “The King and I”. Haha!

We went to visit The Chalong Temple Park to see the Siamese magnificent revered architectures. I instantaneously had that “The King and I” moment where Anna Leonowenns, the British governess who came to Siam to teach King Mongkut’s many children – in my mind! Haha! It was another ethereal experience. By the time we got back, it was already 7.40 p.m. and Kakak became more ill as we had to face congested traffic and rainy weather. I had to bring Rifqi to Kusuma to buy foods for them while Abang Zam who was scheduled to arrive at Phuket circa 9.40 p.m. would have to travel alone via mini taxi to Patong Beach as Kakak couldn’t muster any strength to drive anymore. Around 10.45 p.m., Abang Zam arrived at our lodging.

The alley where promiscuity at its paramount moment. Not suitable for kids, please! 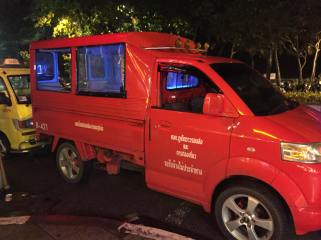 The sin city and its famous transportation.

Since that would be my last night at Phuket, I thought of exploring the nightlife – not for any promiscuous activity but to observe the commotion. I went out alone to explore the Patong Beach boulevard and alleys and it took me around 45 sweaty minutes. I could see prostitutes and ladyboys coaxing horny blokes (mostly Arabs! Haha!) and some table dancers with skimpy clothes. Hooters waitresses also were wearing their “official costumes” to serve the people. Now, seeing these sex workers doing their own bidding to keep breads on the tables make me ponder. We, the “holier” people always see them as filthy or dirty. But the truth? We are worse – only that we do not parade our wrongdoings so vividly in the public. We move behind the curtains in discreet. This reminds me of A. Samad Said’s “Salina” and the Broadway’s “Miss Saigon”. Truthfully, there’s always an untold, deep story behind every sex worker – as to why they chose that and what prompted them. And we are not holier than them. We SHOULD REMEMBER that, no? 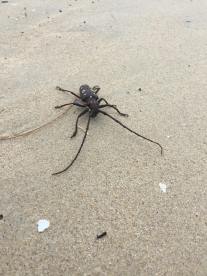 The scenes at Patong Beach, Phuket Island. Is that the Phuket’s version of David Hasselhoff in Baywatch? Haha! Go, lifeguard! 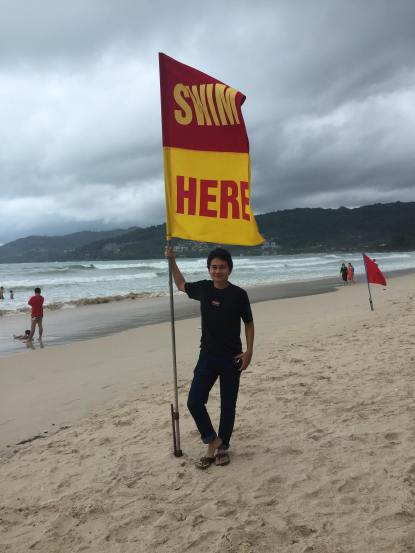 Black is the epitome colour to hide your figure. You can become skinny if you wear black. If you are a scrawny addict who think having bony 52kg and lower weightage is attractive, just wear black all the time! Hahahah! But not for me, I don’t wanna balloon up but I also don’t feel my old weight of 52 kg is attractive. Nay.

On my last day 20th June 2018, the weather was still rainy and Kakak was still bedridden and threw up couple of times. Possibly food poisoning? To kill time, I explored Patong beach with Rifqi and we played chess and hanged out at the beach together. I explained to him about the 2004 Phuket tsunami and showed him the video as we witnessed the dark clouds and ferocious wave of Andaman Sea. During lunch time, Abang Zam drove the car to the Halal resturant, Saveena (situated opposite the Patong Mosque) and around 6 p.m, we made way to the airport. By right Kakak was thinking of bringing me to the Tiger Kingdom but the plan didn’t materialize as she was feeling very weary. It was raining heavily with congested traffic. Initially Kakak was stubborn to drive but she couldn’t go any further and stopped at Patong Seaview Point and finally let Abang Zam drove. Finally after 2 hours and a half, we arrived at the airport. They had to rush back to Patong once they dropped me. I was touched seeing them weathering the traffic and all to send me.

Do visit this Saveena Halal Restaurant. Just opposite the Mosque!

The Air Asia flight was delayed and I only got to fly circa 11.00 p.m. I arrived at KLIA2 around 1.30 a.m. and Putrajaya circa 3.00 a.m. So, I already collected my Comprehensive Exam questions (will be writing about it later on!) at my supervisor’s office at 9 a.m. On whole, I am looking forward to have another vacation in Thailand. Khap Khun Krap. 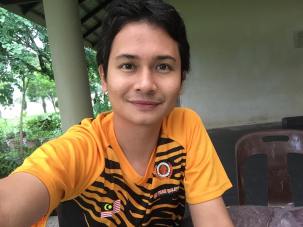 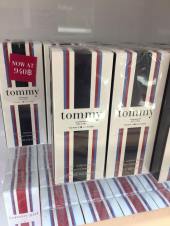 An Eid reward for myself – a Tommy Hilfiger. To give my body that nice smell. Miaow. Haha!